Should Your Business Use Tumblr?

What happened to Tumblr?  It has a couple hundred (million) users, but even then, it seems like it was almost a flash in the pan.  According to WSJ, Tumblr was recently purchased by Yahoo to bring a social networking presence to the company that is mostly used by an older customer base.  A Google Trends search makes it pretty clear that it’s the forgotten middle child of social media.  (Does anyone else appreciate the irony of using Google to report on something Yahoo-related?  Fickle internet..)  So even though it’s hovering in the shadows for now, should your business use Tumblr?

Tumblr’s users are in a younger demographic.  If you’re 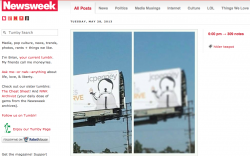 marketing to that younger crowd, this could be a great tool.  But even if you aren’t marketing to a younger crowd, you can utilize Tumblr in an effective way.  Most notably, if you have highly sharable, visually appealing content or snippets of interesting text.  Newsweek, among others, does a great job of this.

It is primarily a visual platform; if you have pictures to share, this is great.  So why not use Facebook or Instagram?  Well, my friends, you can cross-post.  And you can reach more people than just those who follow you.  If someone likes your content, they can “reblog” or share it on their own Tumblr page, and so on and so forth.  So how is it different than Facebook?  You can tag your pictures, similar to Instagram, and let the viral nature of Tumblr do its job.

The simplicity of this platform is also appealing.  Instead of focusing on making your website visually stunning (let theBrewRoom do that for you), you can focus on making your content visually stunning.  Do you sell ice cream?  Post one mouth-watering picture a day and watch people go nuts.  Again, I understand that Instagram is the hub of “food pornography,” but you can cross-post!  Take that picture with Instagram and post it to Tumblr, too, for maximum exposure (pardon the pun).

The ability to curate content is also a nice bonus to using Tumblr.  You really can make your Tumblr page look like a museum full of attention-grabbing pieces.  On average, people suggest focusing about half of your social networking posts on curating content.  Here, you’re able to reblog other people’s posts and have them show up in with your content if you so choose.  Hence the “social” part of this network.

Sure you can use this as your sole website for your business, but I like to think of Tumblr as an extension of your brand identity.  The users are a little edgier, a little more tongue-in-cheek, a lot more visual, and therefore more likely to share things they find visually appealing on Tumblr.