Second in the series of “Should Your Business Use…”  If you missed last week, catch up on my recommendations about Tumblr!

Pinterest is a virtual world of visual stimulation where users can upload and bookmark, or “pin,” in a very public, very organic way.  Since it’s inception three years ago, Pinterest has exploded.  As of April 2013, there are 48.7 million users; of them, 80% are women and 67% have bought or found something they wanted to buy using Pinterest.  This place is a referral powerhouse.  So, should your business use Pinterest?

Well, do you cater primarily to a female demographic?  You do?  Excellent, keep reading!  (And eve 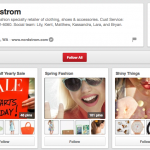 n if you focus on men, you want to be on Pinterest.  I’ll get there.)  I mean, who wouldn’t find something to buy when you basically have a gigantic billboard of “I want this now!”  Veruca Salt would have a field day (not sure how many pins are of squirrels, though).

Sure it sounds like fun and games, but you have to be mindful of who you are trying to reach.  And in the Pinterest game, Nordstrom is winning with over 4.4 million followers.  Why?  They have a clear focus and a specific audience in mind.  And they are careful to monitor it.  Says Shauna Causey, Nordstrom’s social media manager:

We found that it’s a great way to not only share info but also learn about our community. Pinterest allows us to see what trends and styles the community likes based on engagement – likes and repins.  We view this as another way to engage with customers rather than marketing.

Now there is something worth noting.  While Nordstrom is using Pinterest as a way to gauge community engagement, they think of Pinterest not as a marketing tool but as a way to build a community. 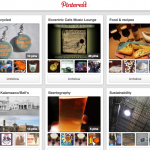 Switching to man-land, the Bell’s Brewery Pinterest page is one of my favorites.  Sure they have recipes and decorating ideas, but it’s focused on beer, specifically their beer.  Yes, there are craft ideas, but they are beer crafts.  There’s also a board dedicated to happenings in Michigan (it would help to note that they are based in Kalamazoo).  Again, you see community engagement.  You also see a company who has a clear focus of what the page is supposed to do and who is using it.  It’s a perfect blend of Bell’s Brewery advertising with a general message of “this is for people who enjoy craft beer” in a natural, non-obtrusive way.  They highlight their best assets, but in a way that is very organic to what Pinterest is.

So even if you aren’t a boutique clothing store or a trendy cafe, you can (and really should) be on Pinterest.  Like I reported regarding Tumblr last week, this is a hub of visual marketing.  Still not convinced that “serious” businesses are on Pinterest?  Check out the New York Times.  They’re all in.

Oh, and you can keep up with my Veruca Salt habit here, the power behind theBrewRoom here, and the other stellar guest blogger here!