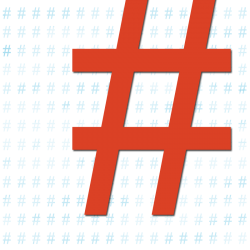 The lines between virtual and reality are constantly being blurred.  It seems as if the only thing separating these two entities is a finely-erased line.  Every TV show has a badge in some corner of the screen with the proper “hashtag” to use while “live tweeting” about the show.  TV shows don’t have exclusive rights to that–there’s the ubiquitous Twitter and Facebook logo included in every commercial, movies now have their own branded hashtag where before they just had a branded website, and even junk-mail-post-cards have some social media insignia displayed proudly.

Don’t get me wrong, last summer when I watched “Master Chef,” it was incredibly helpful to have each person’s twitter handle displayed under their real name during one-on-one interviews and an official hashtag to use so I didn’t look like I wasn’t “in the know” and a total twit (pardon the semi-pun).

Although, the strategy has to be, well, strategic.  They say that one negative review ensures that 10 people will hear about it.  With social media and the rabid dissemination of all sorts of messages, that number is more likely to be some exponential integer.  In an article on the AdAge website, “CW’s ‘Twitter Party,’ or the Upfront’s Hinging on Social,” CW’s VP of integrated sales and marketing, Alison Tarrant reflects:

CW was careful not to bombard fans with irrelevant or aggressively promotional content […] You have to be very thoughtful and strategic about whether it makes sense for brands to play in social media. If users feel they can’t get anything of value, they will ignore the promotion or, worse, discuss their annoyance with friends and followers.

Using social media to connect and extend the reach of traditional media will provide a closer connection to the brand.  This isn’t just for television shows, either.  Think about it: if you go to a local restaurant and they don’t have some sort of social presence–Twitter, Facebook, no one monitoring and responding to Yelp reviews–you think they just don’t care and some teeny tiny part of you may start judging (or is that just me?)  We’re so used to being connected everywhere all the time, like Jessica Brown wrote while exploring Pittsburgh using apps.

I encourage–nay, implore you to set up social media accounts for your business yesterday if you haven’t already, and make sure someone actually monitors them.  Nothing is worse than going on a Twitter account for a company that hasn’t been updated in months, especially if they have the Twitter bird, whose name is Larry by the way, splashed all over every poster, post card, and menu page.

So it seems that we’re stuck with the hashtag in the corner of the screen during any given episode that’s broadcast.  Go forth and use it wisely.